“Likely one of the best locally written and staged works done by any company in the area…”
–David Burke, Quad-City Times

“J.C. Luxton’s writing has a beautiful eloquence about it… an unmistakable feel of authenticity… His Bear Girl is a worthy addition to the troupe’s history of exceptional productions of exceptional works.”
–Thom White, River Cities’ Reader

A world premiere written by Prenzie co-founder JC Luxton, Bear Girl is a story of women and war and the young man who will become Black Hawk.

Bear Girl, daughter of a Sauk chief, burns with the certainty her mother still lives as a prisoner of her people’s enemies.  After hearing a young man urging war, she begins manipulating family and friends to promote him as a leader, instigating an epic struggle for control of the Midwest. Bear Girl is a story of women’s power in a time of war.

Behind the Scenes of Bear Girl 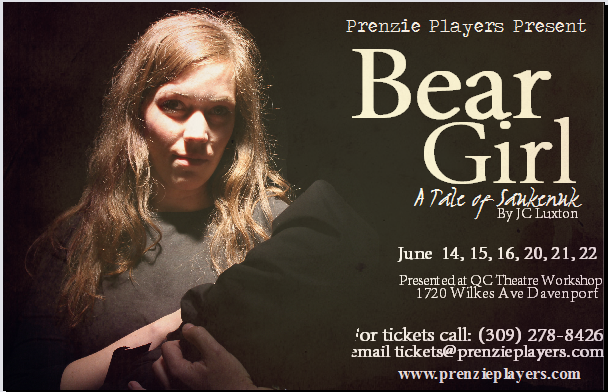 Bear Girl was first performed by Prenzie Players at QC Theatre Workshop on June 14, 2013.  The production was directed by Cait Bodenbender; the field recordings and soundscapes were by Terry Skaggs, bird and beaver taxidermy were by Merideth Nepstad, fight choreography and weapon construction were by Aaron Sullivan, and the lighting design was by William Scot Grecco Bray; the stage manager was Chris Sanders-Ring. 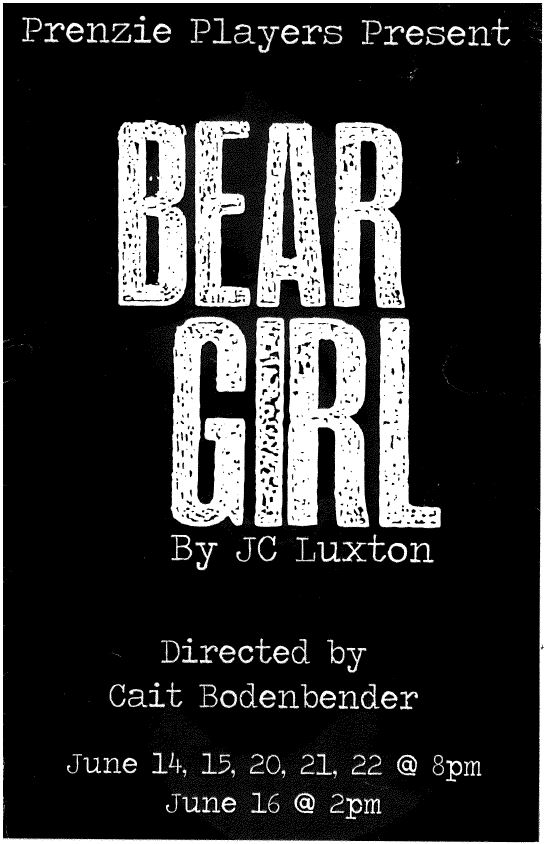 Beth Woolley
The Venerable Woman of the Fish Name
Already Fish
Peeks Her Head Out
Niabi, a Down Below prisoner

Becky Wren
Flying Over
The Venerable Woman of the Buffalo Name